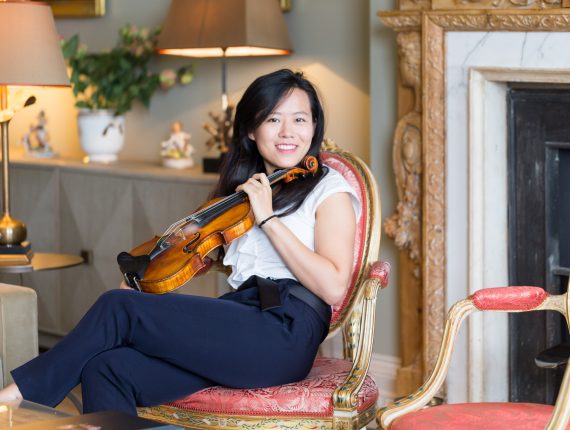 Amy Yuan is a prize-winning violinist/erhuist and Associate of Royal Academy of Music who is an alumna of Millfield School and completed her Bachelor and Masters studies at the Royal Academy of Music with Distinction. Her professors were Maurice Hasson and So-Ock Kim. In 2015, Amy founded Amy Yuan Academy in London, with the aim to provide first-class music training, foster artistic talents and to build an international community of young musicians. So far, the academy has welcomed over 800 young musicians from over 40 countries to its events and activities. In January 2020, Millfield School named a music scholarship after Amy. In 2021, Royal Academy of Music signed a Memorandum of Understanding with Amy Yuan Academy and became an Official Partner Organisation of the academy’s flagship project – New Talent Youth Music Festival.

Hailed by the prestigious London Symphony Orchestra St Luke’s String Academy as ‘The Most Promising Musician’ and having been the only Chinese leader in the history of National Youth Orchestra of Great Britain, Amy is dedicated to bringing western and eastern cultures together through music and education. Amy’s educational work has been recognised in the UK and she has been invited by British Prime Minister to attend Chinese New Year Receptions at 10 Downing Street.

Amy regularly gives violin-erhu recitals across the UK, Europe and Asia, with repertoire ranging from the classic to the modern and contemporary. Recent concerts include solo Violin-Erhu recitals at British Ambassador to China’s Residence in Beijing, St Paul’s Girls London and Trinity College Chapel, Cambridge.
On the erhu, part from performing traditional Chinese songs, Amy is a keen jazz musician who is always ready to explore new possibilities. She has toured Poland with jazz band ‘Asian Strings’ and has provided sound track for Cadbury Milk Tray’s 2017 advert and collaborated with Danish pop singer Aura Dione on the song ‘You Got Wings’.

Amy began to study the violin in Beijing at the age of four. Her first teachers were Zhilong Wang and Xiaozhi Huang, both professors at Central Conservatoire of Music in Beijing. Amy was the leader of the Beijing Youth Chamber Orchestra and frequently appeared in major concert halls in China as soloist with the orchestra. At the age of twelve, Amy won 1st prize in the Young Beijing Violinist Competition and was selected to perform in front of Henry Kissinger and senior Chinese officials in the Great Hall of The People. Amy started her studies in UK when she was fifteen.

Amy has taken part in many education development and outreach programmes. These include the London Symphony Orchestra’s Take a Bow projects working with children from East London boroughs, and Open Academy (in partnership with Westminster and Brent Music Services), which brings music to people in prisons, hospitals and care homes. Amy has also volunteered as a violin tutor for the Music Masters.

Amy is very grateful for sponsorships from Lord Rothschild and Ms. Joyce Ma during her years of study.